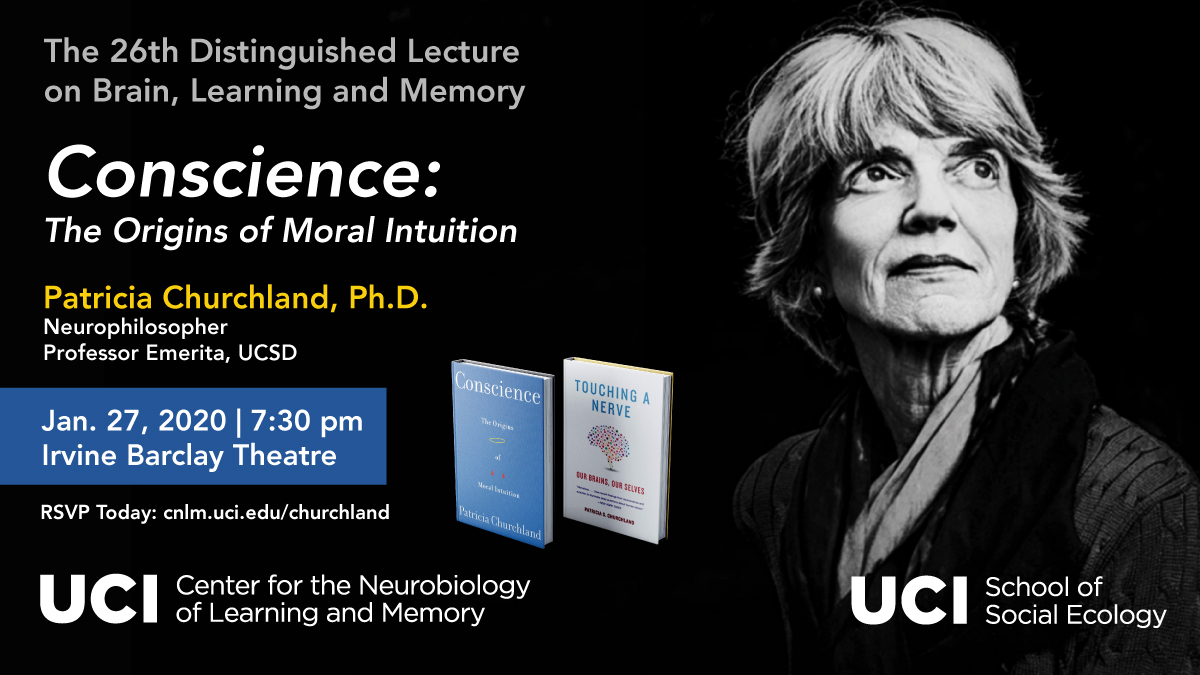 Registration for this event has passed.

The event recording is below.

The 26th Distinguished Lecture Series on Brain, Learning and Memory presents Dr. Patricia Churchland, Neurophilosopher and Professor emerita of Philosophy at the University of California, San Diego. This event is co-hosted by the Center for the Neurobiology of Learning and Memory and the School of Social Ecology.

Date: Monday, January 27, 2020
Time: 7:30 p.m.
Location: Irvine Barclay Theatre. Parking is $10 at the UCI Student Center
Join us in the lobby after the lecture for a book signing and cookies. Patricia Churchland's latest book Conscience: The Origins of Moral Intuition will be available for purchase.

Patricia Smith Churchland is a Professor emerita of Philosophy at the University of California, San Diego, and an adjunct Professor at the Salk Institute. Her research focuses on the interface between neuroscience and philosophy. She is author of the pioneering book, Neurophilosophy (MIT Press 1986), and co-author with T. J. Sejnowski of The Computational Brain (MIT 1992). Her current work focuses on morality and the social brain; Braintrust: What Neuroscience tells us about Morality (2011 Princeton U P). Touching a Nerve, published by Norton in 2013, portrays how to get comfortable with this fact: I am what I am because my brain is as it is. In June 2019, her latest book was released – Conscience: The Origins of Moral Intuition. She has been president of the American Philosophical Association and the Society for Philosophy and Psychology, and won a MacArthur Prize in 1991, the Rossi Prize for neuroscience in 2008, and the Prose Prize for science for the book, Braintrust. She was chair of the Philosophy Department at the University of California San Diego from 2000-2007.

About the Distinguished Lecture Series on Brain, Learning and Memory

The Distinguished Lecture Series on Brain, Learning and Memory was founded in 1995 by James L. McGaugh, Founding Director of the CNLM. The lectures are an integral part of the CNLM's outreach mission and are intended for a lay audience. The series is widely regarded as the most successful public lecture series at UC Irvine and in Orange County.

Find out More
Scroll To Top