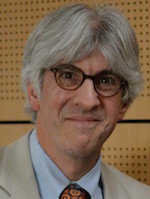 Our laboratory uses functional magnetic resonance imaging (fMRI), diffusion tensor imaging (DTI), high density electroencephalography (hd-EEG), and transcranial magnetic stimulation (TMS) to study the organization of the normal human cerebral cortex and the changes that it undergoes after neurological injury, particularly stroke. We focus particularly on speech, language, and hand motor function. In the study of normal adults, we have found that the language areas of the brain are more widely distributed than previously thought, extending to brain regions that are anatomically removed from those originally postulated by Broca, Wernicke, and Déjérine, and extending to both cerebral hemispheres. To characterize this distributed functional anatomy, we use multivariate mathematical modeling approaches across brain regions and methods of analyzing distributed population codes within regions. We have recently found that the comprehension of speech requires neural processing in areas thought to be primarily involved in production, and that the underlying mechanism is likely to include action simulation via the mirror neuron system. We have also determined that the circuits for higher-order language comprehension are highly integrated with those for encoding information into memory, and that activity in these circuits depends critically on the information value of what is heard. In the motor system, we have found significant overlap in the neural circuits for kinetic motor imagery and overt execution of finger movements, but that when examining the circuit using multivariate distributed modeling, the interactions among cerebellar, parietal, and premotor (frontal) cortices on can be seen to differ significantly. In the study of expert motor performance, we recently demonstrated that professional athletes have a much more constrained and focused pattern of brain activation than novices, incorporating mainly primary and secondary motor cortices, without any significant limbic activation as found in novices. In our studies of stroke recovery of speech, language, and hand motor function, we perform longitudinal behavioral testing and brain imaging during natural recovery and during treatment interventions. During natural recovery, we have shown that patients’ performance improves and their pattern of brain activity changes, and that the hemisphere ipsilateral to the injury and the cerebellum contralateral to the injury play the major role in recovery. Various intervention studies are in progress, both for aphasia and hand motor recovery, and these studies aim to take advantage of the process of observation-execution matching, the human analogue to the macaque mirror neuron system, to improve function after stroke and the understand the brain mechanisms of recovery.