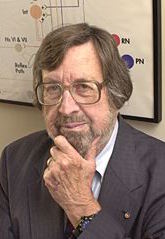 Our dear friend Richard (Dick) Thompson died on September 16, 2014 at the age of 84. We remember him fondly as a pioneer of neuroscience and a great supporter and Fellow of the CNLM. USC news report here.

Dick was among the first to ever link neural plasticity with behavioral plasticity, work that he began while at UC Irvine. His most famous work came in 1982 when he was at Stanford. There, he elegantly mapped in exquisite detail the neural  circuitry involved in the rabbit classical eye-blink conditioned reflex, providing very diverse, yet cohesive and compelling evidence that the cerebellum mediated this response, contrary to popular beliefs about the cerebellum’s role in motor control and not learning. This work was beyond seminal, as it presented a research model for how circuit mapping and systems neuroscience should be conducted. Dick was a friend and mentor to many in the CNLM and will be remembered fondly.