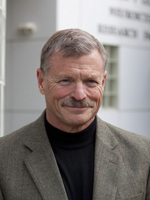 Steward’s research program explores how neurons establish, maintain, and modify their synaptic connections. One component of my research evaluates cellular and molecular processes that contribute to repair after CNS (especially spinal cord) injury. A description of this component of my research may be found on the web site for the Reeve-Irvine Research Center. The second component addresses the mechanism underlying gene expression at synapses. Information storage in the nervous system is thought to be mediated by changes in the strength of individual synapses. These changes in turn are determined by adjusting the structure and/or molecular composition of the synapse through a process that requires the expression of particular gene products. But how gene products are targeted to individual synapses, especially as individual synapses are being modified, still remains a mystery.   Almost 25 years ago, Steward discovered that polyribosomes were selectively localized just beneath postsynaptic membrane specializations on the dendrites of CNS neurons. Polyribosomes are collections of ribosomes that are actively engaged in synthesizing protein. They are the basic machinery of protein synthesis. Their localization at synapses immediately suggested what was then a novel idea about how neurons might manage the difficult task of synthesizing gene products for the thousands of individual synaptic sites that are present on a typical CNS neuron. Specifically, the localization of polyribosomes at synapses implied that certain key proteins that were important for the function of that individual synapse might be synthesized on site, and that this local synthesis might be controlled by signaling events at the individual synapse.  Steward’s current research assesses how particular mRNAs are targeted to individual synaptic sites on neuronal dendrites. We have shown that certain newly synthesized mRNAs are selectively targeted to synapses that had recently experienced a period of intense activity. The studies involve selective activation of a set of synapses that terminate in particular locations on the dendrites of neurons in the hippocampus. Strong activation of these synapses induces the expression of several immediate early genes, including one that encodes a protein known as Activity-regulated cytoskeleton-associated protein (Arc). In situ hybridization analyses revealed that newly synthesized Arc mRNA is selectively targeted to the postsynaptic domain of the synapses that had been activated. Our recent experiments have demonstrated that the signal for docking is triggered by NMDA receptor activation. We are now using a combination of molecular biological and neurophysiological techniques to further define the signal transduction events that cause newly synthesized mRNA to dock selectively at activated synapses.