CNLM Ambassadors Host Panel Discussion on “How addiction hijacks the brain: what animal models can tell us about the neurobiology of drugs of abuse”

As the world is reopening in the second year of the COVID-19 pandemic, we bring our attention back to the perilous issue of addiction and substance use disorder (SUD). On July 13, 2021 the Center for the Neurobiology of Learning and Memory (CNLM) Ambassadors hosted a panel discussion about addiction, with a focus on the crucial role played by animal models in enabling researchers to investigate its neural mechanisms and develop better treatments. Four UC Irvine scientists provided their expert views on the topic while answering questions from the audience. 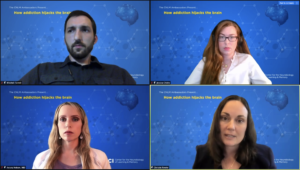 Dr. Jessica Childs, a postdoctoral scientist in Dr. Marcelo Wood’s lab, explained that addiction is broadly a learning and memory disorder and the cravings during addiction are due to the naturally strong ability of neural pathways to associate cues with reward. Dr. Christie Fowler, an associate professor in the department of neurobiology and behavior, emphasized that addiction works by hijacking our neural pathways for pleasure, motivation and decision making, which is also the reason behind the difficulty we face in quitting the addiction. Dr Ariana Nelson, who is currently an associate clinical professor in the department of anesthesiology and perioperative care at UCI, elaborated on the American Psychiatric Association’s (APA) definition of addiction (DSM-5 criteria), as a more severe form of SUD, a complex condition involving uncontrolled use of a substance despite harmful consequences. As per APA, such addictive “substances” can range from nicotine and opioids to internet gaming and gambling, while caffeine and overuse of cell-phones lurk around the borderlines of the the DSM-5 criteria to define addiction.

How can animal models help us understand addiction?

The basic neural circuits involved in addiction-related behavior are seen across all the mammalian brains from rodents to humans. Dr. Nelson explained that scientists try to incorporate the criteria from DSM-5 to develop a behavioral model of addiction while considering factors such as using different sized drug-doses as reward, comparing animal behavior for natural reward vs. drugs, incorporating tasks with different levels of effort to obtain the drug, and even comparing pleasurable and aversive experiences the animals are willing to go through to reach the drug reward. Mitch Farrell (soon to be Dr. Farrell), a graduate student in the lab of Dr. Steve Mahler explained that his lab looks at rodents of different ages and in diverse environmental conditions that are habituated with the substance being studied. As the rodents develop cravings, their neural and behavioral responses are studied to gain a deeper understanding of addiction mechanisms. Even though rodents have been useful in understanding addiction, the panel talked about being mindful of certain differences observed between rodents and humans in their addiction behavior.

The panel discussed implementation of modern neuroscience tools to investigate the neural circuits that modulate various aspects of animal behavior during initial, intermediate and late stages of addiction, withdrawal, and relapse behavior. Molecular biology tools are used to measure the effect of drug exposure on  formation of various proteins in the brain tissue. Drug-affected brain regions showing changes at molecular level are then studied to reveal the role of single neurons and neural networks in modulating addiction behavior. Cutting edge tools used to  monitor and manipulate the activity of neurons include brain implants (to record electrical impulses in the brain), miniature microscopes (to get high resolution images of neural networks in action), optogenetics and chemogenetics (using light or chemicals to control activity of specific brain cells).

Using such methods, several brain regions have been identified that play a crucial role in addiction, either as a part of  reinforcement-based reward pathways such as ventral tegmental area (VTA; a region in midbrain known for its role in reward learning via dopamine projections to other brain regions) and nucleus accumbens (NAc; part of the reward pathway in the basal forebrain, receives neural projections from VTA), or other regions specifically identified to be associated with addiction behavior such as medial habenula  (a brain region in upper part of posterior forebrain that bidirectionally modulates relapse behavior) and ventral pallidum (a brain region in lower central part of the brain that is involved in alcohol addiction and shows hyperactivity in rats addicted to cocaine). Mitch pointed out that regions such as the dorsal striatum (a brain region near the center of the brain that regulates habit-formation) may also regulate relapse behavior. In addition, the panel talked about the involvement of regions for learning, memory, and decision making such as hippocampal formation, and cortical association areas in addiction.

Which factors can help in predicting whether someone would relapse or not?

Prof. Fowler pointed out the role of fMRI studies with treatment-seeking addicted human subjects in identifying the external cue (such as an image of a drug) induced craving-response along with monitoring the brain activation across addiction-related brain regions. Such studies also identify the role of brain regions controlling impulsive-behavior, and assist with predicting whether the individuals are at low- or high-risk for relapse. In addition, Prof. Fowler emphasized the nature vs nurture component of addiction. Giving an example of tobacco (nicotine), she explained that genetic make-up (nature) of an individual affects factors such as different rates of metabolism and different “buzz” felt by individuals for the similar exposure to a drug and affects the level of dependence, likeliness of quitting, and possibility of relapse. Moreover, a strong effect of the external environment(nurture), manifested through epigenetic regulation of aforementioned processes makes the problem of addiction much more complex to tackle. In addition, various other factors such as age, gender, biological and psychological state of an individual affect the degree and duration for which a drug can have detrimental effects. For example, exposure to drugs such as nicotine and cannabis via e-cigarettes in adolescent youth causes long-lasting changes in brain circuits. Individuals with certain genetic makeup who smoke excessive cannabis in adolescence are prone to develop schizophrenia-like symptoms later in life. Alcohol consumption during pregnancy leads to alcohol syndrome in some children after in-utero exposure to alcohol. At the same time, the panel discussed that not all individuals with aforementioned conditions develop addiction-behavior and there remains a lot to be understood about the causal factors and to achieve that, the panel highlighted the importance of global databases for a comprehensive account of such factors that regulate addiction behavior.

While discussing the possible therapies for addiction, the panel mentioned some FDA approved drugs for treating alcohol and tobacco addiction and agreed that, while there are few therapies involving induction (medication that makes the subjects go through withdrawal), there are not many effective treatments currently available, although a lot of them are in the approval pipeline. A combination of psychotherapy with moderate doses of mushrooms (psilocybin) has shown some promise for treating alcohol addiction but the panel advises caution on using agents such as cannabis, ketamine or psilocybin for treating addiction as such treatments may only lead to replacing one problem with another while offering no long-term solution to improve health and wellness. Since a possible medicinal treatment for addiction would also affect the brain's reward- mechanisms, it has been difficult to selectively target neural circuits gone awry without interfering with what makes us feel the pleasures of being human. Although, new technologies for targeted drug-delivery systems for activation/inactivation of specific neural circuits have shown some promise in recent research. The panel discussed the importance of using policy changes to incentivize pharmaceutical companies for investing in research and development  of addiction treatments.

While staying cautiously optimistic, the panel unequivocally supported the importance of decriminalising drug abuse and the role played by basic research in developing better understanding of all the factors that regulate addiction, that will eventually lead to development of better treatment and therapies. Besides, to solve the challenge of society’s increasing cell phone addiction, we may have to wait till we find a suitable animal model. 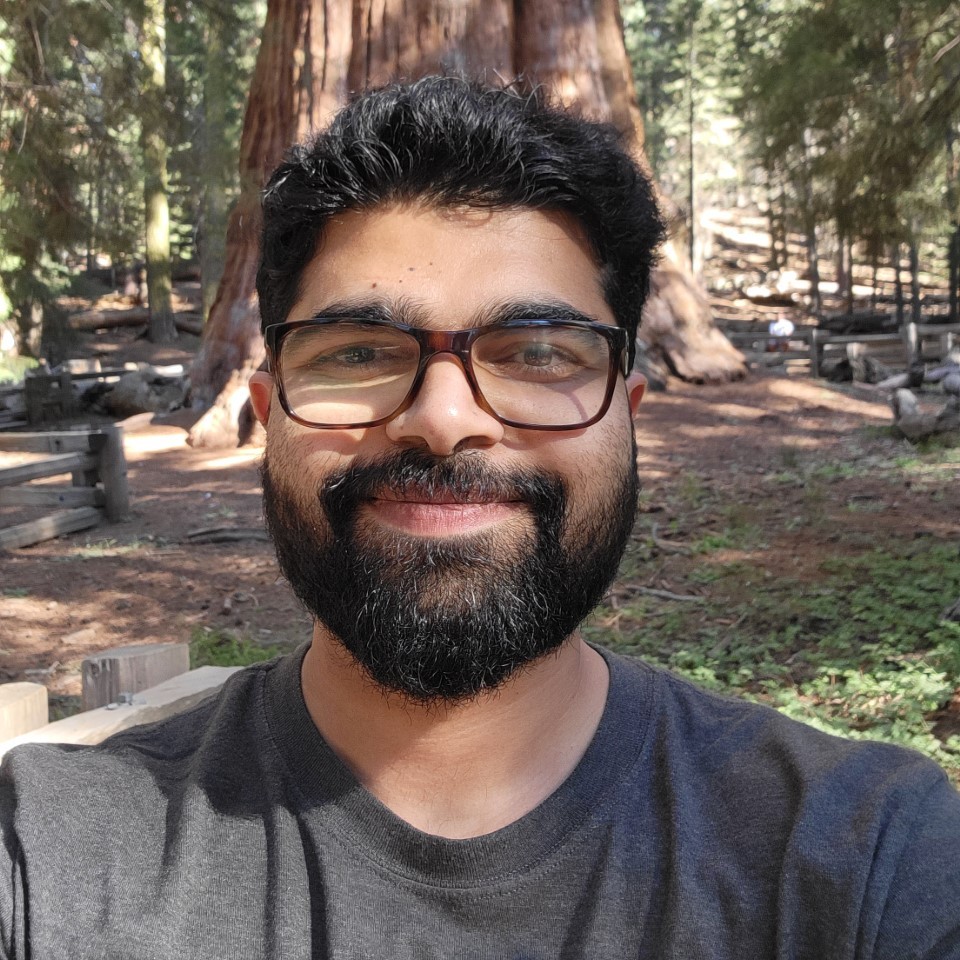 Aditya is a Postdoctoral researcher in Prof Norbert Fortin’s lab, Department of Neurobiology and Behavior at the Center for Neurobiology of Learning and Memory. He is investigating the neural basis of learning and memory, while currently focusing on the role of neural activity in auditory and olfactory behavior with animal models of healthy and diseased conditions. After getting his PhD in Neuroscience from India, where he worked with Dr Balaji Jayaprakash (Center for Neuroscience, IISc, Bangalore), he did his initial postdoctoral research in the Neurophysics lab with Prof Mayank Mehta at the Department of Physics and Astronomy, UCLA before joining the Fortin Lab at UCI. He is an active member of CNLM outreach activities and likes to communicate the wonders of neuroscience to the community beyond academia through blog-posts, outreach and mentorship programs, science comedy writing, and stand-up.