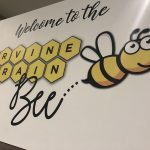 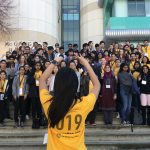 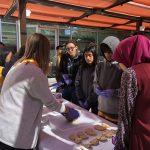 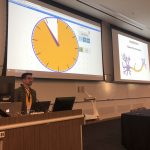 On February 16, 2019, UC Irvine’s Center for the Neurobiology of Learning and Memory (CNLM) hosted 59 students from 23 different high schools in the inaugural Irvine Brain Bee. As a local chapter of the International Brain Bee, the Irvine Brain Bee aims to inspire Orange County high school students to learn about the brain and promote public engagement with neuroscience. More than just a neuroscience test, the brain bee is a whole-day experience that includes hands-on demonstrations, a keynote lecture, and lunch with UCI scientists.

Each year, the first-place winner of the Irvine Brain Bee receives a trip for two to participate in the USA National Brain Bee.

The first event of the day: neuroscience fact exam. A feeling of nervous excitement filled the room as students filed in to take the exam. They had been crunching brain facts for a few weeks to prepare. Many of them had attended a pre-competition review session led and taught by UCI graduate students, where they were given a good overview of brain anatomy and had the opportunity to ask questions. Two weeks later, at the Irvine Brain Bee, they were given both a written exam and a brain anatomy exam. Students were asked questions on topics like emotion, memory, sensory systems, and neurological diseases. The top ten scoring students went on to participate in the finals round later in the day.

With the test out of the way, the students were free to enjoy a lineup of brain-related activities. First, they had the opportunity to talk to a panel of UCI graduate students, where they asked questions ranging from advice about colleges to discussions about current neuroscience research. The panel featured a special appearance by Dr. James McGaugh, founding director of the CNLM and distinguished professor emeritus of Neurobiology and Behavior at UCI. Dr. McGaugh gave a short but inspirational talk highlighting the importance of memory and why we study it: “Our lives are only about one second long,” he said to the captive students. “Memory is how we hold on to our lives from one second to the next.”

After the panel, the students participated in several hands-on activities. They got to hold real human brains and sheep brains, and explore the different structures of each brain. Many of the students had never seen or touched a real brain before, and this was a unique opportunity for them. They also did experiments with Backyard Brains, where they got to control a robotic claw using signals from their own muscles. Lastly, they tested their ability to draw a star while looking at their hand in a mirror, which drew some laughs as it turned out to be much harder than it sounded.

The activities ended with a special keynote lecture by Dr. David Reinkensmeyer, a UCI professor and researcher of biorobotics. Students, parents, and the public were invited to listen as Dr. Reinkensmeyer highlighted his work which uses robotic devices to help stroke patients. He described how robot-assisted finger movement, for example, can “trick” the brain into strengthening pathways related to moving the finger on its own, which helps patients recover faster and maintain their recovery after therapy ends. His talk gave the audience a window into how diverse the field of neuroscience is and how many different applications it can have.

Finally, the day wrapped up with an exciting final round of oral questions. The top ten-scoring students from the morning exam sat in front of four UCI faculty judges and were asked challenging questions about the brain. Contestants were eliminated if they got three questions wrong. The high schoolers were so well-prepared that the judges were left digging for more challenging questions! After being pelted with over 40 questions and a neck-and-neck race for first place, the competition finally had a winner.

In third place was 10th grader Vardaan Bhat, from Irvine’s University High School. This was Mr. Bhat’s first Brain Bee, and he says his favorite part of the day was touching the brains. He is a Boy Scout and hopes to be an Eagle Scout soon. We look forward to seeing Vardaan again at next year’s competition!

In second place was Shrinidhi Gopal, a 10th grader from Dougherty Valley High School in northern California. Ms. Gopal is no stranger to competitions like this: she also participated in the Scripps National Spelling Bee as well as local science fairs. “The keynote lecture was so inspiring and the entire day’s events have increased my interest in neuroscience so much more,” she said of the competition.

The first place winner of the inaugural Irvine Brain Bee was Snehaa Ganesh, an 11th grader from Vista Del Lago High School, who joined us all the way from Sacramento. Ms. Ganesh told her parents that she had to be in Irvine that day, but didn’t tell them why. She surprised them with the reason as they arrived on UCI’s campus. She plans to study astrophysics in college and says that competing in the Brain Bee has inspired her to minor in neuroscience.

As the winner, Ms. Ganesh will advance to participate in the 2019 USA Brain Bee.

The 2019 Irvine Brain Bee would not be possible without the support of our headlining sponsor, The Allergan Foundation. 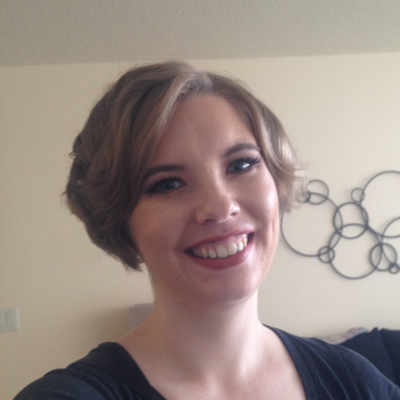 Jaclyn Beck received her M.S. in Computer Science from UW-Madison and is now a PhD student in neuroscience at UCI. She studies how the brain’s immune system plays a role in the development of Alzheimer’s disease. She is very interested in making science fun and educational for children and adults alike. She hopes that encouraging good communication between scientists and the general public will lead to a larger and more diverse group of scientists.