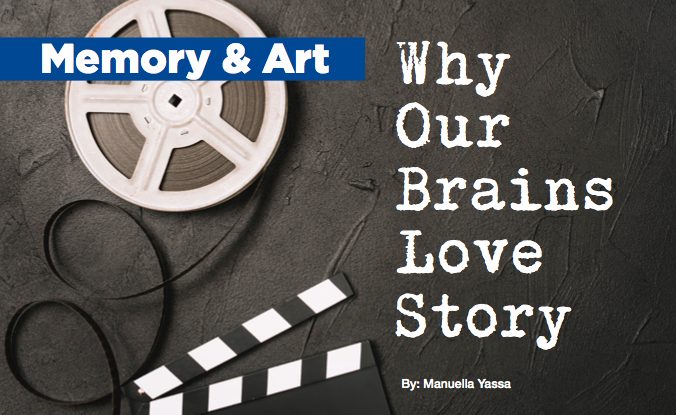 We all love to sit down with a good book or a movie and feel transported to an alternate reality. What makes a story so captivating? How does the brain construct a narrative and why does it seek logic and structure in any story? Can neuroscience offer insights into the art of storytelling?

Acting instructor David Ihrig and neuroscientist Michael Yassa believe storytelling comes naturally to humans and our brains are wired for it. With funding from UCI Illuminations, the Chancellor’s Arts and Culture Initiative, as well as support from the Center for the Neurobiology of Learning and Memory and the Claire Trevor School of the Arts, they designed a two-part interactive series to take a deep dive into the brain basis for storytelling.

Part I of this series took place at the Herklotz Conference Facility on November 13, 2018. The concept for this session titled “Scientific Story Shaping” was to create a story with help from the audience and deconstruct its components in terms of neuroscientific principles. This crowd-sourced story outline will serve as the starting point for Part II, The Performance, a minimalist production based on the art and (neuro)science of storytelling.

In addition to Yassa and Ihrig, two more panelists took the stage and worked with the audience to shape the story elements. The first panelist was Adam Leipzig, CEO of Entertainment Media Partners and a former Disney Executive. He supervised such films as Dead Poets Society (1989), Honey, I Shrunk the Kids (1989), and The Way Back (2010). While president of National Geographic Films, he acquired the international rights to March of the Penguins and created the US version. He is a faculty member at UC Berkeley Haas School of Business, and Senior Creative Advisor for CreativeFuture.

Leipzig kicked off the panel discussion by describing the process by which the story was created for A Plastic Ocean (2016). It began with a loud thud - boxes of uncut tapes landing in a production warehouse containing thousands of hours of footage. But there was no story. The challenge was to take this raw material and craft from it characters, narrative, and a compelling storyline. Of course, the film went on to win awards at film festivals all around the world and was an eye-opening experience for its viewers.

The second panelist was Lisa Cron, story consultant, author, speaker, and instructor at UCLA Extension Writers’ Program. She has written two books that utilize brain science in story creation; Wired for Story & Story Genius. Lisa has worked in publishing at W.W. Norton, as a producer on shows for Showtime and CourtTV, and as a story consultant for Warner Brothers.

Cron walked the audience through the tenets of storytelling and why our brains are wired for story. In her words, “A story is about how what happens affects someone who is in pursuit of a deceptively difficult goal and how that person changes internally as a result.” Emphasizing complex characters with a history and back story was a recurring theme throughout the evening.

“My story is one about survival,” said Yassa. The brain is wired to encode memories in terms of narrative as it is the basis for building causal chains.

“If A happens, then B happens, then C happens, and I can remember that narrative, my brain can predict the future. After all, that is exactly what memory is good for. It cares very little about our past. It only cares about making future decisions that benefit our survival.” Putting storytelling in the context of the brain’s survival instinct clicked with Cron who writes about the same themes in her books.

Ihrig was last to take the podium. The last time he successfully bridged neuroscience and the arts was during his innovative interdisciplinary course, the “Science of Acting”. The highly acclaimed course was by all measures a successful experiment that will likely transform how acting is taught in the classroom.

“I want you all to close your eyes and think for a minute about the one thing you would like to get out of today’s session,” he said. Ihrig’s passion for teaching shows clearly as he guides the audience through this exercise.

“Now you’re ready. You’re primed. You each have a sense of purpose and a goal. A back story. That’s the most important element of building a narrative,” he beamed.

"Our brains are wired for story. It's a survival mechanism"

Over the next hour, the four panelists solicited feedback from the audience to create and shape a story together. Elements began to flow and Leipzig took to the white board to take down the barrage of ideas. A few minutes into this exercise, however, he stopped. The audience were hitting a roadblock. Lepizig calledthem out and told them to dig deeper and come up with something real and emotional. After a little hesitation, ideas began to flow again, but this time with refreshed vigor and realism that was more compelling than any stereotypical Hollywood story.

Slowly but surely, the ideas started to take shape and follow an interesting and nontypical narrative. A shoe store, a mother’s relationship with her daughter, and a cliche about people always being out for themselves became the basis for a crowd-sourced original story. Working with these elements, students in UCI’s Drama department will work with Ihrig as well as Jane Page, Head of Directing and faculty member in Drama to create a minimalist production that takes into consideration neuroscientific principles of storytelling. Part II will be early in 2019 and will bring back the audience for a live performance and reflection.

Parting words of advice to the audience of impromptu writers from Adam? “Make it funny!" 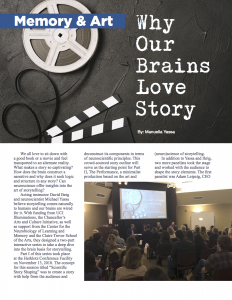