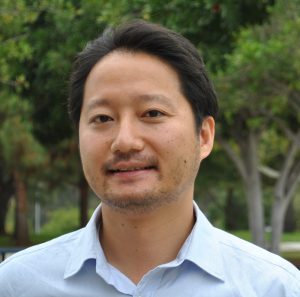 Space, the final frontier. Uncharted and unexplored, it remains a mystery to us. But aside from the common cliché – apologies to all Trekkies – space is much more than the enigmatic celestial void we contemplate with wonder and awe. It is everything around us, from our personal space to traversing the planet. Navigating successfully around space is essential to our survival as a species. Some may be better than others. There’s even a gender difference, but I’ll let you guess what it is. As we get older, all of us begin to struggle a little with navigating around new as well as familiar spaces. But for a patient with Alzheimer’s disease, this ability can be severely compromised. Enter Kei Igarashi, assistant professor of Anatomy and Neurobiology and Fellow of the Center for the Neurobiology of Learning and Memory (CNLM) at the University of California, Irvine. His work is making strides in understanding how spatial navigation and spatial memory mechanisms deteriorate in Alzheimer’s disease, potentially paving the way to improved diagnosis and treatment.

I arrived at Igarashi’s newly established lab in Irvine Hall on the medical school campus ready to pepper him with questions about his most recent paper. He welcomed me into his no frills office looking out onto Irvine’s expanse of undeveloped desert.

On one side stood a wooden chair etched with the University of California letters. “I bought this for 30 bucks!” he commented with pride. On the other side stood a bookcase where one book in particular was placed prominently in front – a pristine copy of The Cognitive Neuroscience of Memory by Howard Eichenbaum, a memory pioneer who had passed away suddenly only a few days before our interview. Eichenbaum visited the Irvine CNLM just a few months before and Igarashi made sure to get his copy of the book signed by the distinguished author. “His early studies on olfaction informed my work a great deal. Such a tragic loss to us all…” he soberly remarked. 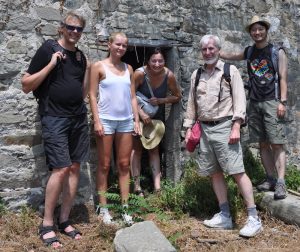 He asked me to sit down on a cushioned chair next to his desk, as I pulled out my camera, pen, and notepad. Igarashi arrived at Irvine in the spring of 2016 after completing a highly coveted postdoctoral fellowship with Edvard and May-Britt Moser. The Mosers were awarded the 2014 Nobel Prize in Physiology or Medicine, an award they shared with University College London’s John O’Keefe for their collective discoveries related to the brain mechanisms of spatial navigation. The Mosers direct the Kavli Institute for Systems Neuroscience in Trondheim, Norway. “I could not have asked for better mentors in fundamental science”, he said.

Since arriving at Irvine, Igarashi’s lab has focused on making new inroads into understanding the role of brain oscillations in spatial processing and how these mechanisms are disrupted in Alzheimer’s disease. Spatial navigation involves a set of interconnected circuits nestled in regions deep in the brain, the hippocampus and the entorhinal cortex. The same two regions are among the earliest sites to deteriorate in Alzheimer’s. A coincidence? Likely not. Igarashi is studying this intricate system in detail to identify why it fails. 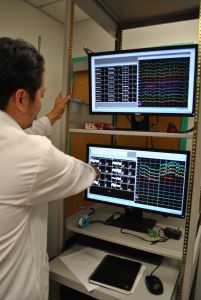 His lab is recording electrical activity directly from these regions in a novel Alzheimer’s mouse model. The amyloid precursor protein (APP) knock-in model developed by Japanese researchers in 2014, he explained, offers several advantages over transgenic models. This particular model exhibits typical age-related pathology without overproduction of other APP fragments. His findings, published in June of this year, show impairments in the synchrony or coupling of brain waves in these mice. In the normal brain, two different types of brain waves (gamma and theta) synchronize to allow for information transfer from one brain region to another. In the Alzheimer’s mouse, however, gamma oscillations in the entorhinal cortex were impaired.

It was Igarashi’s postdoctoral advisors, the Mosers, who first identified cells in the entorhinal cortex that represent space using a grid pattern (dubbed grid cells). Disruption of the gamma rhythm in the same region could be a possible mechanism for spatial navigation deficits in Alzheimer’s patients. Next, he intends to stimulate the region to determine if the gamma rhythm can be restored. He hopes to accomplish these experiments in the coming months.

Just a synapse away from the entorhinal cortex is another region that is of particular interest to Igarashi. The piriform cortex, the olfactory center in the brain, has direct and privileged access to the entorhinal-hippocampal memory system. All other senses must funnel through the thalamus, traditionally thought to be a relay station (although admittedly it’s more complicated). Olfactory information, however, passes directly to the memory centers of the brain. Igarashi has his eye on this system as well, one that is known to be vulnerable in the early stages of Alzheimer’s disease. Using olfactory tasks with precisely timed odor delivery, he hopes to use a combination of electrophysiological recordings and optogenetics to better understand how this system operates and what features may be compromised in Alzheimer’s. 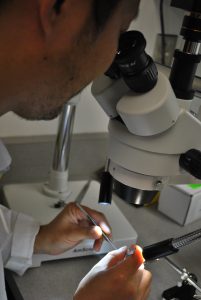 We walked across the hall to his lab where he took me on a quick tour. Immediately visible were two large computer monitors showing raw traces from the electrodes connected to his physiological recording equipment. Around the lab he had organized a surgical station, a T-shaped maze for behavioral tests in rodents, as well as an olfactory chamber. We then sat at his fabrication station, complete with tools and gadgets for building electrodes and machining electrical components.

“When you’re setting up a lab, no one gives you a shopping list,” he shrugged his shoulders. It was clear that he rose to the challenge quickly and set up his lab with state-of-the-art equipment. “And then of course, some things you have to make”, he demonstrated to me how to make a tetrode – four wires twisted around each other.

I marveled at the simplicity and asked “what does it do?” He laughed, “Everything!” He explained that this simple technology transformed the field by allowing investigators to identify individual cells firing by recording electrical activity in their vicinity. The tetrode was invented by another CNLM Fellow, distinguished professor Bruce McNaughton, one of the key reasons why Igarashi was motivated to come to Irvine. “It’s remarkable to be at the same institution with a pioneer like Bruce.” 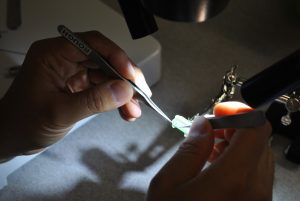 As I watched him work the forceps deliberately and carefully under the microscope, I couldn’t help but notice the precision and fine motor skill needed for such work. I asked if this came naturally or took years of practice. “Both” he said, “but I played with Legos quite a bit as a kid.” I suspect it took a bit more than Legos to acquire these skills. Despite having students and postdoctoral fellows in the lab, Igarashi still spends considerable amounts of time in the lab himself, doing experiments, setting up rigs, building tetrodes, testing animals, and teaching his growing team how to use these techniques to address the scientific questions at hand.

Igarashi’s work on spatial processing in Alzheimer’s disease is clearly poised to transform the field and is gaining steady support. Most recently, he received a highly competitive seed grant to support his innovative work from the Brain Research Foundation, a nonprofit supporting neuroscience research. The first of many, he hopes. We hope so too.

Uncharted and unexplored as it may be, work by Igarashi and others stands to make the fundamental and translational neuroscience of space a little less of a mystery.