What makes some memories fleeting and others persistent? In 1890, William James suggested that memories, particularly emotional ones, can be so strong as to leave “a scar upon the cerebral tissues”. For centuries, the ability of salient experiences to leave behind persistent traces has captivated scientists and philosophers alike. While we now have a better understanding of the neural bases underlying the formation of many types of memory, the neural mechanisms of their persistence, and implications of this persistence for neuropsychiatric disorders have been subject to much debate. For example, it is not clear whether persistence and forgetting are active or passive processes at a physiological or biochemical level. Our understanding of how memory traces are transformed over time by repetition, rehearsal and reconsolidation (broadly defined) is also evolving and subject to conflicting views. The role of modulatory processes – including reward, stress, and fear – in making memories persistent is also a rapidly growing area of interest, with particularly important clinical implications. The 2017 Annual Meeting of the Center for the Neurobiology of Learning and Memory focused on this particular set of issues and facilitated a discussion of the state of the science, crucial unresolved questions, and experimental paths forward.

The conference featured three symposia that addressed this brand topic:
1. Persistence in rehearsal, retrieval and reconsolidation
2. Persistence of reward and addiction memories
3. Persistence of fear and stress memories

Day 1 of the conference began with a session titled “Persistence in rehearsal, retrieval and reconsolidation”, which included talks by Dr. Courtney Miller (Selective disruption of memories without retrieval), Dr. Gary Lynch (A new pathway-specific form of LTP related to episodic memory), and Dr. Michael Yassa (Repetition and semanticization of episodic memory). This session, moderated by Dr. James McGaugh, featured a debate among scholars regarding the very nature of lasting memories.

The second symposium of the day, titled “Persistence of reward and addiction memories” featured talks by Dr. Christie Fowler (Nicotine dependence and cholinergic signaling mechanisms: Implications for learning and memory), Dr. Steve Mahler (The Monkey sleeps lightly: pathological persistence of relapse risk in addiction), and Dr. Matt Lattal (Persistence extinction and the problem of relapse). The session, moderated by Dr. Marcelo Wood, grappled with the question “Is addiction a memory disorder?” 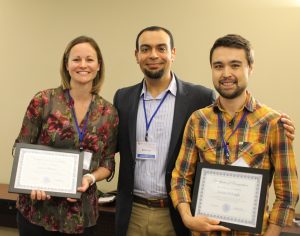 The final discussion, “What makes some memories fleeting and others persistent” was co-moderated by Dr. Michael Yassa and Mr. Roger Bingham. A memorable moment was when James McGaugh asked “if memory is defined as an experience that changes memory, is a sunburn a memory?”

Next year’s CNLM annual meeting will be a larger, international conference and will be held at the Hilton Waterfront Resort in Huntington Beach April 18-22, 2018. Symposium submissions will open May 1, 2017.

More information can be found at www.learnmem2018.org