2014 Nobel Laureate Dr. John O’Keefe (University College London) will give the Dean’s Distinguished Lecture on March 30 at 4:00 PM (reception to follow) at the Arnold and Mabel Beckman Center of the National Academy of Sciences. Parking is available adjacent to the conference facility and is free. This event is completely booked and registration is now closed. 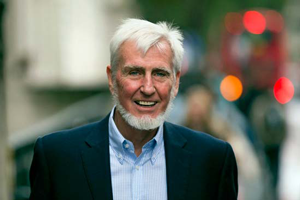 The hippocampal formation of the mammalian brain constructs a spatial representation of the environment which can be used to identify current location, to remember events that happened there in the past, and to navigate to desirable locations. Spatial cells found in the hippocampal formation represent the animal’s location (place cells), its current heading direction (head direction cells), the metric of the environment (grid cells), and the animal’s distance from boundaries of the environment (boundary vector cells). These cells provide two ways of identifying the animal’s location, first on the basis of its relationship to environmental landmarks, and second on the basis of path integration signals which update this location on the basis of interoceptive cues from the vestibular, proprioceptive and motor systems. All of the neurons use firing rate as the code for spatial representation. In addition, however place and grid cells use a timing code, which may play an integral role in one of the mechanisms by which the hippocampus carries out spatial computations. I will describe these ideas and discuss recent experiments which provide further insight into how the brain`s `cognitive map` is constructed.

Born in New York City to Irish immigrant parents, O’Keefe received a BA degree from the City College of New York. He went on to study at McGill University in Montreal, where he obtained an MA degree in 1964, and a PhD degree in Donald Hebb’s Department of Psychology in 1967, supervised by Ronald Melzack. He originally went to University College London in 1967 as a US NIMH postdoctoral fellow working with the late Patrick Wall. He has been there ever since, and was awarded a professorship in 1987. He is a citizen of both the United States and the United Kingdom.

O’Keefe and his student Jonathan Dostrovsky discovered place cells by systematically analyzing the environmental factors influencing the firing properties of individual hippocampal neurons. His numerous publications on place cells have been highly cited in the field. In addition, he published an influential book with Lynn Nadel, proposing the functional role of the hippocampus as a cognitive map for spatial memory function. His work formed the basis of hundreds of papers recording activity from hippocampal cells and modeling hippocampal function. In 1993, he reported with Michael Recce that place cells spike at different phases relative to theta rhythm oscillations in the local field potential of the hippocampus, what has come to be known as theta phase precession. In 1996, with Neil Burgess, O’Keefe demonstrated that the position and size of place fields shifted when the barriers defining the environment were altered. This led to the discovery of boundary vector cells, which have since been demonstrated also in the subiculum and the medial entorhinal cortex. Collectively, these discoveries have shaped the neuroscience of learning, memory and spatial navigation.

Dr. O’Keefe is a Fellow of the Royal Society and of the U.K. Academy of Medical Sciences. In addition, he received the Feldberg Foundation Prize in 2001 and the Grawemeyer Award in psychology in 2006. In 2007, he received the British Neuroscience Association Award for Outstanding Contribution to British Neuroscience and in 2008 he received the Federation of European Neuroscience Societies European Journal of Neuroscience Award. Later in 2008, O’Keefe was awarded the Gruber Prize in Neuroscience. He was appointed as the inaugural director of the Sainsbury Wellcome Centre for Neural Circuits and Behavior. In 2013 he received the Louisa Gross Horwitz Prize (with Edvard Moser and May-Britt Moser). In 2014, he was a co-recipient of the Kavli Prize awarded by the Norwegian Academy of Science and Letters with Brenda Milner and Marcus Raichle. Most recently, he was awarded one half of the Nobel Prize in Physiology or Medicine 2014, with the other half going to May-Britt and Edvard Moser.